Thanks for your interest in Liv 4 Today. To get in touch about collaborations please fill out the form below or email me.

Thanks for dropping in. Liv 4 Today started out as mostly an infertility blog covering topics related to our journey and reflections on living through it. Things changed when on our fourth (and final) IVF transfer, we were finally blessed with a miracle. Beau William was born in August of 2017 and so our journey transitioned from one of infertility, to motherhood. Infertility will always be part of me, and it affects motherhood in ways that

I couldn’t imagine. Join us for this wild ride!

I always knew I wanted to mother but my journey was anything but easy.

LISTEN UP - The Toll of Infertility

Why “Try not to stress” is the worst advice… 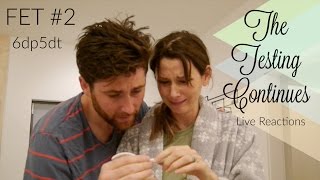 An Open Letter About Our Infertility

So I woke up this morning feeling “less pregnant” than I have in a long time. I had energy, my boobs weren’t sore, I just felt kind of just fine… of course this was incredibly unsettling. The first thing I did when I popped out of bed was take a home pregnancy test hoping to ease my mind. Well that was a fail. It was lighter than it was 2 days ago. Now I will admit, my afternoon tests seem to be consistently darker than morning tests. I’m not sure if that’s in some way due to

So yesterday was beta day and the results came in. It was a long day of waiting, and following up, and waiting, but eventually I got an email from my clinic telling me the results were “positive” (which I was assuming) and that the HCG was 192. My progesterone was in the 50s which was also reassuring. So it was good news. I had hoped my beta number at 11dp5dt would be a bit higher than it was, but I think that’s just me being greedy wanting reassurance. In reality, beta numbe